Every year, more and more stations flip to all Christmas music. And they do it earlier and earlier. In many markets, multiple stations battle to win the season. It seems like a great idea. This has significant implications for every station.

This article explores the pros and cons of playing all Christmas music. Including:

Should You Play All-Christmas Music?

Radio stations that switch to all Christmas music usually do well, at least in the short term. Those that have done it for a number of years usually see the greatest lift as they become known as the Christmas station, building equity for their overall brand.

All Christmas music programming works! It really does. Generally speaking, here is what happens:

I provide a deep dive into how this impacts overall ratings in my eBook The Ratings Game. 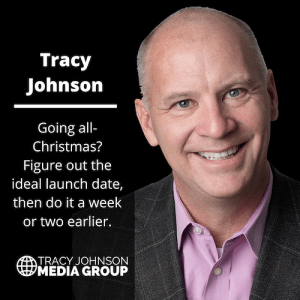 On the surface, it seems like a great idea to switch to an all-Christmas format. And maybe you should do it sooner than later.

Or maybe not. As in most things, there are many factors to take into consideration.

This remains one of radio’s most enduring and profitable gimmicks, according to New York Times reporter Ben Sisario.

The number of stations embracing the format has nearly doubled, and competition between broadcasters often leads to stations turning earlier and earlier.

It’s true. To get a head start on competitors, some make the flip shortly after Halloween. But is Christmas music a gimmick as Sisario suggests? Or is it a smart programming strategy?

Gary Fisher, the owner of Equity Communications’ WEZW-FM/Atlantic City, is a pioneer of the programming tactic. He says the reason it works is simple:

Christmas music is a link to better times.

And in a world filled with stress and negativity, that is a powerful emotion to connect with. All Christmas music could be the most valuable tactic a station has to establish brand value.

Thousands of new listeners come into the Christmas music station, many of whom are unfamiliar with the primary benefits of the regular format. They’re candidates to be converted as fans, at least until everything returns to normal.

Adding new listeners is one of the three ways to increase ratings. The audience spike in the short term is an inexpensive marketing opportunity. Combined with a strategy to convert the new cume in the new year, this could drive long-term growth.

But does this approach work? Sometimes. But not always.

The Impact on P1 Listening

Cume growth alone is not enough fuel to power sustainable growth. Consider the impact a programming change has on existing fans. A percentage of the station’s most loyal fans will be unhappy and could result in a decline in P1 TSL.

There’s a real (and valid) fear that listeners are basically invited to go elsewhere!

Studies show a percentage of new listeners can be retained at some stations. However, as life gets back to “normal” and listeners settle into their routines, most return to their favorite station.

And if Christmas stations lose (pre-Christmas) P1 quarter-hours, there’s no guarantee they’ll all be back after December 25.

So before making the switch, evaluate the brand:

Overall, the audience exchange before and after Christmas seems to be relatively equal. Even if P1’s don’t return, stations hang onto enough new cume to maintain pre-holiday levels.

Viewed as a marketing strategy, playing all Christmas music is a way to reflect the mood of the market.

Consultant Mike McVay has been in charge of stations that have gone all-Christmas for over decades years. He explains why it works:

If you looked at raw numbers — let’s say you started with 100 people and you lost 20 of them because they don’t like Christmas music (exclusively). You’ll get 30 people coming back in because they do. There is audience turnover but the net is a larger audience. Some people put it on all day and leave it on at work. That’s not unusual.

But what also plays into it are the promotion and production pieces that people are fond of — soldiers saying hello to their families, little children talking about their favorite Christmas toy or (gift) wish. So there’s a lot of goodwill beyond the music that makes (the format) very big.

Christmas music makes a positive statement about a station’s brand values, particularly if those values reflect traditional and family (AC and Christian formats).

For new stations or niche formats, it’s a great way to build a larger presence and attract listeners that may not have discovered the brand yet.

Many stations use Christmas to make a format change. If that’s the case, there’s nothing to lose. So switch early. How early? How about right after Halloween?

Some of the value may be “wasted”, but the position is claimed and will likely gain publicity and word-of-mouth. And, if changing format, is there a downside?

Christmas music can act as a palate cleanser to introduce a format change or significant brand adjustment. Since it attracts a large new audience, the new station can be promoted. Don’t worry about keeping it a secret from competitors. Use the new audience advantage to promote what is coming in the new year.

Every year, stations debate the best date to make the switch.

Stake a claim to win the position as far in advance as needed. Don’t be second or third station in, especially if another station is known for it. The first will get publicity. And all those complainers that “it’s too early”? Those complaints are good news.

The traditional time to switch is Thanksgiving weekend (in the US), or the last weekend of November. But do it sooner if possible.

Here are some guiding factors:

That’s okay. Christmas is different. Be different. And be creative with new, fresh ideas.

Check out The Santa Claus show, a powerful feature that is highly promotable (and sponsor-friendly). It’s exactly what stations could use.

Run a Christmas-themed promotion with the goal of building a database with new listeners. These new contacts can be valuable for post-Christmas marketing campaigns.

There are dozens of big Christmas promotions available here.

Then have a strategy for re-entering regular format. DMR President Andrew Curran says,

Rebuilding the audience becomes job No. 1 as soon as the last Christmas song is played.

This is the time to introduce new features, programming upgrades, and format changes. It’s also a good strategy to promote a major contest or promotion even though it is between rating periods. The goal is to establish listening patterns and promotions can be a major part of that.

Consider this a format change, even if it’s just a few weeks. That means a complete brand overhaul, including production and imaging.

Listen to how the WLIT/Chicago staff fully endorses a flip to Christmas (2021):

Flipping to Christmas music is basically a major promotion. It absolutely, positively reflects the market’s mood. It will attract new listeners. Just make sure there’s a plan to retain listeners and bring back the P1’s who may have left during December.

For more details on how to launch a Christmas campaign, download my Guide To Christmas Programming eBook here. 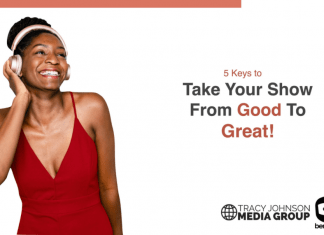 Taking Your Show From Good to Great Pt 1 Seminar on...

Watch this seminar to learn how to take that final step and become a significant, difference-making radio show. https://tracyjohnson.kartra.com/page/embed/cDIan1Qm5Ha4

Steal These 40 Sitcom Plots For Your Radio Show