An arranged marriage is a type of marital union where the bride and groom are selected by their families. It’s still common in some cultures, including radio and television, where personalities are selected for their skills in hopes that a perfect team emerges.

Can an arranged marriage work? Does it work? And what are the keys to success?

First, let’s examine the argument for it.

In most cases, hiring personalities that have chemistry, have worked together for an extended period of time and have a track record of success is what managers look for.

Unfortunately, personalities like this are usually unavailable (contracts or personal reasons), un-movable (comfortable where they are), unaffordable (they’re worth more to stations where they’re already successful) or unattractive (there’s a reason they’re available and wanting to move and it’s usually not positive).

So the talent pool for existing high-impact shows is relatively small. Finding individuals ready, willing and able to relocate is much easier. And since constructing a new team from individual parts comes with some risk to the station, hiring those parts is less costly.

Challenges You Will Face

Arranged marriages can be successful, for sure. There are many examples of personalities coming together to form a dynamic team that turns into a long-term success.

But there are unique challenges that must be taken into account when constructing a show from the ground up.

Working as a team is quite different than performing a solo show. It’s a partnership, and if they’ve never worked in a team environment, it ‘s very different.

Some handle the transition well, but others struggle with it emotionally. Air personalities are generally sensitive, with fragile egos that must be managed carefully. They can be emotional, protective and territorial.

Being on a team means their personal success is directly tied to someone else’s performance. That can be a difficult transition.

Recommendation: Managing the transition requires patience, preparation and setting expectations in advance. Don’t rush the show on the air, expecting to figure it out as we go. Most of your time will be spent trying to manage problems that are fairly easy to avoid.

When you’re on by yourself, it’s easy to know who was responsible when something is off. It’s you. There’s nobody to point the finger at.

It’s human nature to deflect criticism to another source, and on a team show it’s easy to find a target for finger-pointing. As the talent manager, make sure each member of the team has an all-for-one and one-for-all commitment. Make that a clear expectation and enforce it. I call it a for the show mentality.

Recommendation: Each personality (and the manager coaching them) should adopt the Late Bear Bryant’s coaching philosophy: “If anything went wrong, I did it. If it went well, you did it and as we succeed, we did it”.

And managers, never allow the talent to divide and conquer. When individual meetings are requested to discuss a situation, it’s starting a journey down a road that leads to very bad things.

I’ve been involved with many arranged marriages for morning shows. Most of the time, we’ve had success, but usually with significant drama along the way.

The process seems to follow one of three patterns, each described from an actual show:

This is the most difficult of all. When management brings together personalities have never met, it’s awkward. Even more, it’s challenging to identify issues because they haven’t yet built a relationship of trust.

When strangers are brought together, they usually don’t know enough about one another to prepare for the future.

For any show, there are always speed bumps to work through, but the speed bumps are much higher when bringing strangers together.

It takes cooperation, compromise and most importantly, a team-first attitude. You can’t force the chemistry, but when everyone is working together on a common goal, a mutual respect can emerge over time.

See also  What Improv Can Teach Radio Shows About Teamwork

The lesson: Respect is earned, not dictated, and it requires considerable time invested together on and off the air. It also demands that management exercise patience and guidance to help the show come together.

In another situation, we brought together four separate personalities on the same station to become a team. Some had previous team show experience, others were solo performers on their own daypart.

The personalities were personal friends, had great chemistry and trust, and they were already known to the audience.

None of the challenges from Case Study #1 existed. However, each had to learn and accept a new role.

The PD had to manage by explanation, demonstration and a ton of coaching and critiquing. He also had to have difficult conversations with each individual to explain how the team will be stronger when they were cast in a specific role.

Over time (about a year), the show came to understand and embrace the new roles with a commitment to each other and the team. When they did, the show took off and hasn’t looked back.

The lesson: When there’s a willingness and desire to win, combined with a respect for each other, the show can find it’s way much more quickly and effectively. However, management can’t expect it to happen magically. It requires time and explanation for each to understand how they will succeed.

Somewhere in between may be the easiest approach to building a show from scratch. Rather than hiring a full show, build it piece by piece.

From the beginning, the host constantly lobbied for his previous partner at another station. She didn’t sound that special and there was a concern that he wanted to hire her just because of familiarity. Management (and I) resisted the hire, but finally caved and she became co-host #3.

See also  Coach-Don't Correct: How Programmers Can Get Better Performance From Talent

The show immediately improved, and continues to grow and develop into a market leader.

The lesson: Start with the host or anchor. This is the most critical role on a show, as he or she sets the tone and provides the structure in which everyone will perform.

Once the host is firmly established and understands the goals of the station and the target audience profile, add the other parts one at a time, enlist participation every step of the way. Allow input on candidates. They should endorse additions to the show, but not allowed to dictate the additions. This buy-in gives them a stake in each participant.

So what have I learned? Several things:

Know what you want. Hire great talent that fits your vision for what the show will become.

Move Methodically. When constructing a new show, hire one personality at a time, not everybody at once.

Hire great attitudes. A multi-cast show must all share a team-first mindset. Get great players that want to be part of a team.

Clearly identify roles for each player. Make sure everyone on the show knows who does what, and how they fit together.

Build chemistry before going on the air. Give them time to hang out, get to know one another and establish a relationship before that first show.

Allow time for the show to develop. It’s not going to sound great on Day 1. Or Day 30. But it should constantly improve on a path toward excellence.

Ignore the honeymoon period. In an arranged marriage, they’ll all be on best behavior for the first few weeks. The problems start just when you think you’re past the difficult period.

Attitude. Communication. Commitment. It takes time to manage and develop on-air superstars. Invest in it. It’s worth it, and you’ll avoid problems. 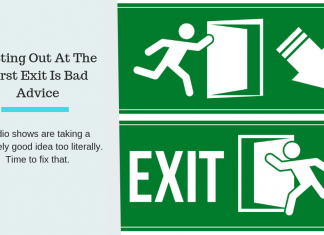 Don’t Get Out On The First Exit. Wait, What?

The more I work with talent, the more common I see this problem: Personalities have been trained to find the high point, take the...